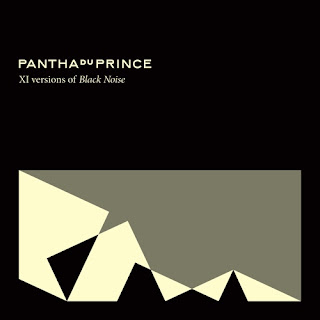 Today I am looking at two releases that in a sense are "releases about releases." The first up is Patha Du Prince and the album XI Versions of Black Noise (Rough Trade). It's a reworking of tracks originally on Black Noise, which was a comp of tracks made by friends of Patha (Animal Collective, Hyroglyphic Being, etc.).

Right off the bat I have not heard the original so I feel like someone who has walked in on the middle of a conversation. But this is not a conversation, it is music and it stands or falls on its relation to itself. To me it most definitely stands.

It's a beat-centered, electronically transformed set of tracks that have trance elements and fascinating sound worlds folded in on itself at every step.

I don't ordinarily listen to this kind of electronica hybrid. I AM always glad to hear something creative in this vein. This is creative, I like it. It ain't disco. It's spaced out in good ways.You might think it's not eventful enough? That is part of this sort of music--it goes on without caring to break out into some hugely attention-grabbing thing. That's not what it is about. So if you accept that this is very well done.