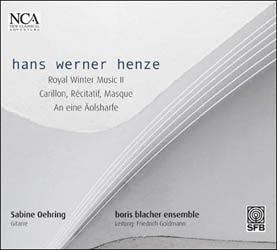 Hans Werner Henze composes music for the guitar that is thoroughly modern and ambitious in its refusal to write music that merely dazzles. As a master composer he looks at the guitar as a vehicle for the music in his head. He succeeds fully in realizing music that does not sacrifice personal vision yet sounds perfectly right for the guitar.

Today we look at a new disk in this light. It features Sabine Oehring on guitar with the Boris Blacher Ensemble (NCA 60227) in a program of Henze works.

"Royal Winter Music II (Second Sonata on Shakespearean Characters for Guitar)" (1979) begins the program for guitar alone. It is a meditative and extremely dynamic work, calling for both subtle and extroverted guitar interpretation. Ms. Oehring rises to the occasion with very expressive yet precise execution. It's a kind of masterpiece and her performance helps you see why.

What follows, "Carillon, Recitatif, Masque" (1974) is a beautifully conceived trio suite for mandolin, guitar and harp. The sonarity of the three instruments in combination shows Henze's acute musical sensibility. It is music that can be simultaneously delicate and deeply evocative, especially in the first and second movements; lively and motor propulsed in the final movement. A wonderful work, lovingly performed.

The final work, "An eine Aolsharfe" (1985/86) is a chamber orchestral gem with some beautiful orchestral-guitar interactions.

In short this is highly lyrical modern music that forms a kind of object lesson on the modern concert guitar as a vehicle for advanced music. Friedrich Goldmann leads the Boris Blacher Ensemble with exacting attention to the wonderful nuances of Henze's mature style. Sabine Oehring gives an exemplary performance of music that calls on all the artistic interpretive powers available to the modern concert guitarist.

Bravo!
Posted by Grego Applegate Edwards at 6:25 AM