"From Avenue A" Documents the Transition from Yiddish to Second Generation Pop In New York, 1914-1950 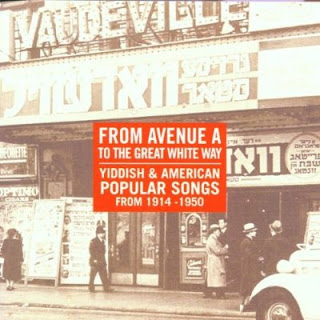 What is world music? It is music of any world, even the world of New York City. That is, that part of the NY world that is not (or was not) an inherent part of the mainstream Western industrial machine-culture. That's one way to look at it. It is also the world of people who are either dwelling, or came from elsewhere. Now that may seem like a sort of ethnocentric arrogance, but on the other hand it does imply a genuine interest in reaching out and appreciating the music of brothers (and sisters) often thought of as "the others." It is the music of those at the periphery of a WASP-dominated culture, historically. "Periphery" does not imply that their culture is marginal, only that it is seen at the "center" as something "other."

With that in mind we give a look today at an unusual 2-CD anthology, From Avenue A to the Great White Way: Yiddish and American Popular Songs from 1914-1950 (Columbia Legacy C2K 86323). The producers have rummaged far and wide through those old Columbia 78 matrices that survived, and emerge to present a set of sometimes rare, almost all extremely well-preserved recordings covering the Yiddish Theatre and the gradual incorporation of tonality, comedic approach, style and musical cadence into the world of Broadway and swing-pop. (Or alternately, the gradual incorporation of jazz, pop and strictly pan-Manhattian subject matter into the Yiddish musical ethos.) This was the New York City of an especial fertility, culturally speaking--and of course that included the flourishing of Afro-American music, jazz, and other forms of music that are not addressed on this anthology to any great extent except as those elements come into contact with Yiddish elements.

Keep in mind that this is not a collection of a klezmer-to-pop spectrum. Klezmer does have some representation, but in fact Yiddish Theatre incorporated dance forms and other klezmeric elements but had its own "syncretistic" elements in addition, even over in Europe. So you find Yiddish folk strains, aspects of European operetta and popular generalized music hall elements from a pre-jazz era. The singers were the focus and they had a style that we can only wonder at and admire, since the times have gone by and the tradition is not a part of our 21st century musical life. It is very extroverted, declamatory, timbrally distinct and has a largeness fitting to the need to project to the very back rows of the theatre. Other folk and Cantorial elements are too a part of the vocal mix.

At any rate the anthology covers a great deal: comedic songs, the equivalent of arias in a distinctly Yiddish style and tonality, a Cantorial recitation or two, Yiddish-English pop/theatre hybrids with a retention of the Yiddish ethos and minor tonality but addressing the transforming world of Yiddish-American New York, second generation Jewish artists who take on a more pronounced swing/jazz/pop element, sometimes doing distinctly Yiddish derived versions of pop material of the day, big band swing incorporating Yiddish elements--including a great Cab Calloway cut, and so on.

With an anthology of this sort so much has to be left out and it would be easy to note what one might have liked to hear more of. "Pure" Yiddish theatre is a bit sketchily covered, presumably due to what matrices the producers found in very good condition. So there are some major stars of the theater that are not represented or under-represented. And the Yiddish-American-transformation music selection has some notable absences. Why no Bagelman Sisters, for example, who had a highly developed Yiddish-swing style that Columbia covered in a least a few releases (I have a couple of good 78s myself)?

All in all though this is a fascinating look at a unique period in the musico-cultural world of New York, and shows in microcosm the outlook of immigrants in second and third generations and their gradual (even if sometimes superficial) integration into American socio-cultural life. It is also a matter of how the Yiddish theater and folk-culture influence formed an important part of vaudeville, mainstream pop and Broadway musical theatre, and of course comedic style.

Well worth pursuing. . .
Posted by Grego Applegate Edwards at 5:37 AM