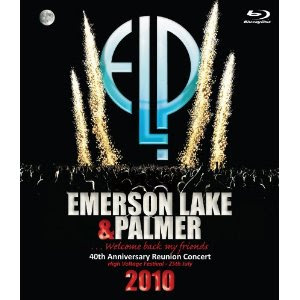 Say what you like, Greg Lake as vocalist and bassist with the first edition of King Crimson, Keith Emerson with the Nice and then the two joining with drummer Carl Palmer as ELP created a body of music that was enormously influential, a mainstay force in what later was called Prog Rock.

But of course there were others working the same turf in those days. What the Beatles, Procol Harum, the New York Rock and Roll Ensemble and the Left Banke did for the Baroque era of classical music ELP did for the Romantic and early modern era. They electrified it, gave it rock leverage and melded it to advanced rock song form. Of course they didn't just do that, but they did it so consistently and generally so well that their sound was one of the cornerstones to what came after. There also were of course the flirtations with jazz, the virtuoso keyboard aspect of the band and perhaps most importantly the art-song perspective that Greg Lake introduced to the mix which distinguished them from the earlier Nice and gave them more depth.

Last year ELP were invited to close the prog High Voltage Festival in England. They had not played together for something like 12 years, but eventually agreed. As Greg Lake remarks in interview portion of the DVD on tap today, they were men in their 60s recreating music they had first played in their 20s. Could they rise to the technical demands of the music and create the sound anew for a new generation of would-be fans?

The answer is contained in abundance on the new DVD 40th Anniversary Concert 2010 (MVD Visual/Concert One). There are a few rough patches here and there, and of course this is a one-take situation. Emerson occasionally sounds slightly overtaxed in the most bravura passages, and Greg Lake's voice has lost just a touch of the upper range, or at least has initial rustiness at the top of his voice for the first few songs. But Palmer is fit, the music flows majestically in a program of their most well-known pieces, while the classic light show, mist machine and electrically charged etc stage routine comes off without noticeable hitch. All is well-captured sonically and visually for the DVD.

Anyone serious about advanced rock in those days will recognize most if not all of the program. Those new to the band will see them do what they do best. Those that do not like ELP or prog will not change their minds. Regardless, this was designed as a one-shot deal, so it is possibly the last chance audience and band had to commune together. That aspect permeates the set and is rather touching. Yes, they've gotten older, but they rise to the occasion and pull it off with class and honesty. It brought back all the reasons I and many others of my generation followed the band with interest, then branched out our listening to the fusion, prog and electric jazz that flourished in the period and beyond.

The DVD brings all of that back and does it with visual and aural impact. So get this if you want a good show. "The show that never ends" may have ended here. Be a part of it if you are so inclined.
Posted by Grego Applegate Edwards at 5:00 AM