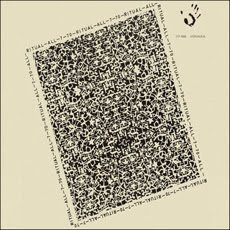 Those dedicated to the art of free improvisation are probably not destined to become household names. Take Alan Sondheim, who in 1967 made a historically important record for ESP Disk entitled Ritual-All-7-70.

His group consisted of himself plus five other instrumentalists and a singer. The record hardly catapulted him to fame or fortune, yet it stands today as an unrecognized landmark in the evolvement of the music that stemmed off from jazz per-se and to some extent contemporary concert music.

That ESP is reissuing the recording now after many years can only be a good thing. There are thirteen cells of sound & music with unique instrumental combinations and colors. Sondheim plays a battery of instruments, including electric guitar, alto sax, the Indonesian suling, koto etc, and his bandmates complement him well in a series of short musical excursions that vary in tone and mood.

What strikes one now is the multi-instrumental aspect of the mix and the multi-stylistic parameters covered. All of it has a free sound but also a sort of post-modern eclecticism that is distinctly world-oriented or pan-ethnic. Its dubbing as “Ritual-all-7 70” is apt, because there is definitely a ritual performance feel to the program. It’s an unstated ritual with no special tradition behind it.

Sondheim and his crew realized sooner than most. . . perhaps he was one of the first to realize that music could partake of any and all world sounds and instruments, that no one had to stick rigorously to some previously predefined rules of what should go with what. So you get things that sound a little Asian, African, bluesy, free, rockish and/or whatever else that happened to transpire with the instruments at hand. That many ensembles after did similar forays into the infinitely ethnic is in part thanks to Mr. Sondheim. He apparently remains somewhat active and we can be glad of that. Ritual All is an important and successful experiment in improvisation and collage construction. Thanks to the digital transfer from master tapes and the evolution of our listening habits, it sounds better today than ever and once again ESP re-presents an important musical documentation it fearlessly produced back in an age that was scarcely ready to hear it. This music’s time is now. It’s all for now.
Posted by Grego Applegate Edwards at 7:37 AM