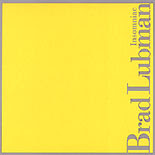 One more in the contemporary classical mode and then it’s on to other things. Brad Lubman cannot be said to be a household name. He is a prominent conductor in new music circles and Tzadik recently put out a disk of his compositions called Insomniac. As with some of the previous composers discussed recently, his music combines in various ways instruments in real-time along with electronically altered and pure electronic sounds. He gives you dramatic contrasts and reference to machine-like tapestries as well as sounds more conventional to the modern concert arena.

He tends to grab the listener a little more aggressively than some of the other composers we’ve been reviewing. His music is a little in-your-face and in the end it makes for a memorable program. This is more muscular material, less involved in dreamscape weaving. The music decidedly will not accept relegation to a background role. You either listen to this music or you turn it off. It demands to be accepted on its own terms. If you agree to that, you get a program of music in a whirlwind. Music for an age where our machines still create infernal clatter out there. It’s consequently more of an urban thing, more industrial in the many ways one could use that word. Good for us when there can still be drastically differing approaches to organizing sound. Here’s one of them—a completely valid way to go about things, executed with a good ear for melding the unusual and the familiar in a personal blend. It will give your ears a workout and you might just like it. Give it a shot.
Posted by Grego Applegate Edwards at 7:05 AM