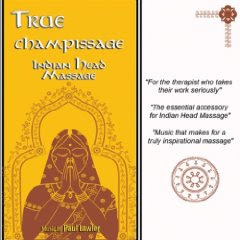 Today we’re back with the second and final installment of the cosmic massage music I was inexplicably sent. This one again has music by Paul Lawler and it is directed toward True Champissage: Indian Head Massage (GeminiSun). Now how many were they expecting to sell? No offense, but the number of people practicing Indian head massage out there could not be too high. And it’s not a cheap production especially. This time the emphasis is on traditional Indian percussion and melody instruments with a cosmic new age synthesizer backdrop. It’s not half bad for what it is. If I were getting my head massaged Indian style, I might ask them to put this on. But I am not so where does that leave me?

This one is headed for the cutout bin at the speed of light. Even though it took some doing to get the Indian instruments arranged to fit with the synthesizer sounds and Lawler manages to make some pretty darned good cosmic elevator music for an elevator to someplace “heavy.” Still, it’s an elevator, and the music is not really meant to be a foreground element. Tomorrow we’ll return to something more in line with what we ordinarily consider.
Posted by Grego Applegate Edwards at 6:35 AM