The Other Side of Los Angeles 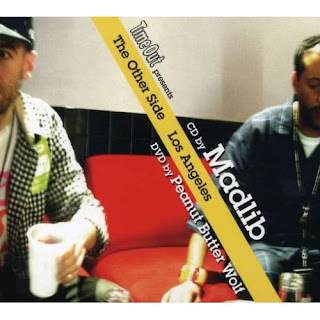 We live in an age where music styles that aren’t directly hooked up to the corporate mass profit machines come and go, revive, fade, then return again. There was a time when if you put on some music of this sort, there were always going to be guitars in the mix, if the music had some relationship, no matter how tendentious, to the “youthful,” the “hip.” Today it is not unusual to put on a CD in this category and never hear a string plucked. That is not entirely the case with today’s CD, but the string plucking is pretty minimized. That should not be a criterion for whether anything is worthy or not, but nevertheless it is simply a fact of part of the scene.

One thinks of the defunct viola da gamba—an earlier stringed instrument with a different string configuration and sound from the later conventional bowed string family. It gradually went out of fashion and disappeared by the end of the baroque era—the early-to-mid 1700’s. Is the guitar destined to share that fate? I don’t think so, but there’s no denying that big pockets of music making today favor the button pushing, keyboard based studio production. Like with hip hop, certainly. Things come in and out of fashion though. There was a time when disco threatened to kill rock, then with a rapidity that is pretty astounding in retrospect, it became really, totally passé. I remember in the later ‘70s seeing some guy at the mall walking past with his boombox blaring one of the Bee Gee's big disco numbers, and people were laughing at him. Flat out laughing. He had become an anachronism, like the music, in a matter of months. Of course dance music never died, but it had to take some time to resurrect itself in the mass public mind. From the ‘80s through to today, there’s an awful lot of pop that really is disco with a new hat on. Well, like it or not things come and go and we don’t have much control over it individually, do we?

Anyway, that’s a prelude to the CD playing on my computer this morning. It’s a CD/DVD called The Other Side--Los Angeles (Deaf Dumb & Blind/Time Out). And it is a representation of what is “hip” today on the LA scene. The DVD is a Peanut Butter Wolf video of the city and what’s cool—shopping for the right sneakers, going to the right dance clubs, eating at the right places. Then there’s talk by Mr. Wolf about his CD Label and some videos of the artists involved. hip-hop chic is definitely what it’s all about. As I checked it out I felt like somebody in the middle of the desert watching a video of people drinking water. (Although I did find out that the sneakers I am wearing right now are cool again.) My lifestyle has become so diminished that I can’t think of nightlife, new sneakers or anything else of that sort. But hey, it was an entertaining survey of LA from a point of view.

One thing funny to me—it all takes place in an ever expanding present. Forget the past, forget history, there just isn’t any on this scene. Yet the dance club shots reminded me how it all seems pretty close to the Disco culture of the mid-70s, only now it’s hip, it’s underground, you have to be in the know to be showing up at these places.

It brings me back to yesterday’s blog. It is hip to be unpopular, at least not too popular. That’s how you build a legend around yourself and your music. I mean, what could be less “cool” right now than Britney or Paris Hilton and her BFFs. Like Tiny Tim, their 15 minutes of fame have been extended but their days may be numbered on the media scene. Our failed Republican VP candidate Ms. Palin is like that too. She’s become much too much a sensation to last out another season or two. And she's popular for all the wrong reasons. (People mostly did NOT vote for her, after all.) She will fade. But that’s politics, so let me drop it.

Back to this music. The program on the Madlib CD that’s a part of today's set is definitely hip—there’s new hip hop stuff, some electric jazz, reggae, even a Sun Ra number with an anti-nuke chant. Almost no guitars here though. Still, I found the music an interesting compilation of things slightly on the edge of the mass media world, and so conveying a particular hipness that I guess the LA underground goes for. What, me worry?
Posted by Grego Applegate Edwards at 8:17 AM