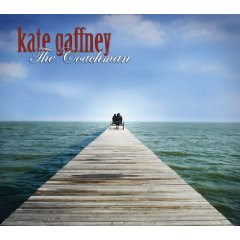 I don’t know a great deal about singer-songwriter Kate Gaffney, save what I know from listening to her last album The Coachman (Dig). She has a nice voice, a little reminiscent of Edie Brickell but only a touch. Most of the songs are quite good, in the style of a slightly country-influenced songwriter rock.

She is joined by a sympatheic supporting cast, notably guitarist Steve Kimock of jamband fame. The final, title cut goes for nearly 20 minutes and has a jam component. It’s good to hear people stretching out like that. I hope for her success. The album gives you a most decent listen.
Posted by Grego Applegate Edwards at 7:42 AM