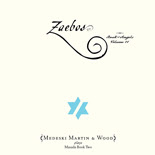 John Zorn’s music captures our attention again today on the CD Zaebos (Tzadik), which consists of music from his Masada cycle as performed by the versatile and talented keys-bass-drums trio of Medeski, Martin and Wood. This is music with a freely charged electric jolt. And there’s certainly a rock component to this Semitic tinged set. MMW puts in one of their best performances ever. A tightly melded fusion of the written music and the trio’s interpretation makes for an organic compound of sound and energy that grooves, digs deeply into the roots of the minor mode sound, soars with musical wings of fire, and rests momentarily on a musical thought before returning again to the driving momentum of the music. The injection of interesting melodic sound blocks, cliché-less riffs and harmonic frameworks combine for an exceptional package of invention.

There was an old NYC ad slogan when I was young. It was for a bread company and it went “You Don’t have to be Jewish to Like Levys.” Zorn and MMW’s appealing disk has that same attraction. Imagine an incredibly hip Emerson, Lake and Palmer playing with an assuredness you’ve never heard from them before. It’s beyond that by a wide margin, but it might give you some idea of the power of this music. Both Zorn and MMW have taken some of the tenets of progressive rock and applied them to a jazz and beyond perspective that doesn’t forget the immediacy of powerful driving waves of sound. That’s an achievement and disks like these truly should be recognized more widely for what they are and what they do. Listeners must abandon what they think they should be hearing and they will surely get more than they imagined. The boldest sound adventures can do that. Keeping warm in a COLD New Jersey. . .
Posted by Grego Applegate Edwards at 8:34 AM