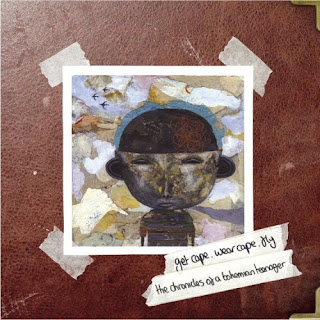 So what about some music? Today’s CD is not something I would have sought out on my own. It’s a songwriting-making-music entity called Get Cape. Wear Cape. Fly. This is at least their second album, I think, and it’s called The Chronicles of a Bohemian Teenager (Atlantic).

I assume from that title and the sound of the disk that it is geared to the younger folks. But the consistently musical quality of the CD means anyone who wants to check out some current sounds can appreciate it. These are real songs of an unhappy young fellow and how he feels. There are some nice acoustic guitar moments and good arrangements. I am glad the song form has not died and these people show you how that is the case. So long until the morrow.
Posted by Grego Applegate Edwards at 7:39 AM