Charlie Parker and the "Bird in Time" Box Set 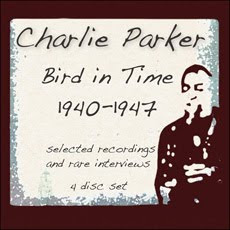 Alto sax and bebop godfather Charlie Parker has been represented on disk by hundreds of releases since the beginning of his career and especially after the advent of the long playing record. Private recordings, radio airchecks and other rarities have come in and out of print rapidly and, in some cases, repeatedly. There’s a new CD box set out there that consolidates some of the best and the most rare, along with some of his commercial recordings, all covering the important period of 1940-1947, when he and Dizzy Gillespie established their revolutionary innovations as a full-blown musical movement. That set, Bird in Time (ESP), gives you four full CDs and a duo of informative booklets.

They approach Bird’s career chronologically, allowing you to follow his first entrance on the scene with Jay McShann and others, and then on to the Parker style in full flower. It’s remarkable to listen to his first demo and compare it with some of the last recordings in the set, to see how much he matured in that period. The compilation is sprinkled with interesting interviews with Charlie himself and some of his fellow travelers. But the thrust of the music is what is critical.

This boxed collection is a well-produced, thoroughgoing supplement to the absolutely critical sides he made for Savoy Records from the latter half of the forties, as well as many of those he made for Dial records at that time. There are a few of the Dial recordings in this set, but someone who wants a truly representative slice of Bird at his most influential and astounding should look for the complete master takes on those labels, which are readily available last time I checked.

The Bird in Time set fills in with Bird evolving stage-by-stage, mainly in a live setting. It is certainly a must for dedicated Parker aficionados and an ear-grabbing listen for anyone who wants to know how this music developed. His breathtaking performances with Diz and others show you that, when the music was fresh and everyone in good form, this was a major milestone in American music, truly the beginnings of what we call modern jazz. And it’s just great music!
Posted by Grego Applegate Edwards at 7:33 AM