Ry Cooder Scores with "I, Flathead" 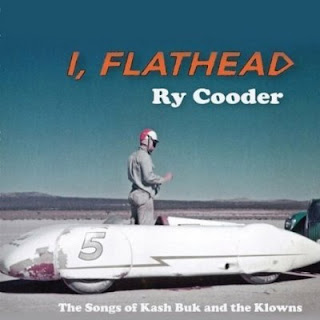 When it comes to electric guitar styling, Ry Cooder established himself in the late ‘60s as a formidable player and has been around the block since, with success as well as staying power. His latest release is in the form of a hard cover novelette and companion CD, I, Flathead: Kash Buk and the Klowns (Nonesuch). It is not designed as a guitar showcase, but there is plenty of his talent on display. A loose story line strings together the songs, and it's apparently related to the plot of the book (I’ll admit I haven’t read it yet). Some of his great slide work is in evidence, as well as some of his skillful and tasteful semi-picking finger articulations.

The lyrics center around a white-trash fellow, a fast-car driving, cash-strapped, hard-living guy and his tribulations. They have that melancholy, fictional-autobiographical tone of classic country music; it rings true without necessarily being strictly factual. And David Lynch's depravity-in-normality vibe comes to mind. The despair of the everyday life of an aging has-been or never has-been slob. . .

Cooder’s laconic vocal style and way with quirky songs are here in abundance. It’s equal parts retro, low-down country rock, blues drenched soundings, Mexicali influenced moments, old-timey flavors and all-around eccentric Cooder. He is the consummate artiste and it is nice to hear him again in this new release. I can’t vouch for the novelette, but it’s all about the music, ultimately, isn’t it?
Posted by Grego Applegate Edwards at 6:24 AM