DJ Bonebreak and "The Other Outside" 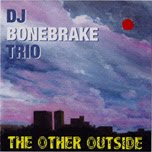 The group X always had a particular originality that made for interesting listening. Their drummer, DJ Bonebreak, turns out to be more than a solid anchor for such a group. He has been busy woodshedding on the mallet instruments to the point where he is a capable player with his own conception of what to play and when to play it.

The West Coast label Wondercap has just released a CD of Bonebreak and a tight little trio called The Other Outside. It has a jazz outlook, but finds itself developing grooves that have a vaguely rock aura in their regular pulse and cyclical repetition of motifs. But Bonebreak’s vibes (and occasional marimba) have a moodiness and personal quality that distinguish this CD from something more ordinary. There aren’t that many passages of improvisation in the conventional jazz sense, but the ultimate effect is one of a serious artist giving us a stripped down, naked presentation of the music in him.

It has a good range of pieces and it maintained this listener’s attention throughout. And he reminds me a little of the late Walter Dickerson. A good CD for those who like the vibes thing, or to get more exposure to that instrument and what it can do.
Posted by Grego Applegate Edwards at 7:09 AM