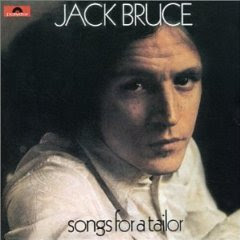 Jack Bruce has made big contributions to the music world since his career launched in the ‘60s. First of all, as an electric bassist he pioneered a bottom heavy electric sound and technique that influenced a generation of players, especially through his work with Cream. Second, he is a superb vocalist and has lent his distinctive voice to rock and fusion classics. Third, he writes songs that innovate with harmonic-melodic quirks that set him way above the pack. And they have the quality of memorability. What else? As a music stylist he has been at the forefront of progressive trends and has freely extended possibilities in the music by being one of those whose blends of sounds seem effortless and beyond the experimental. He has consistently fashioned WORKING models for others to appreciate and emulate.

His first album after the breakup of Cream in 1969, Songs for a Tailor (Polydor) still sounds fresh. The CD release version I have brings in several alternate takes that are different enough from the originals to not function as mere fillers. The album brims over with strong tunes and all of the things that make Jack the opposite of a dull boy (since he works and plays at the same time. Ugh. OK, so that was pretty strained but it’s early in the day so I hope you’ll excuse me.) This is a landmark recording and belongs in the collection of those inclined to want to have and hear such things.
Posted by Grego Applegate Edwards at 6:06 AM