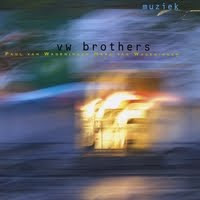 They break out on their own in their new Muziek CD (Patois). Afro-Cuban Funk-Fusion with a touch of Brasiliera is what they favor here. The mid-sized unit performing on the disk puts primacy on arrangements. The originals and how they lay out have their charm. There's a sort of Weather-Report-meets-Latin-jazz feel for much of the outing, and it is not unpleasant. Then again, Tower of Power funk rubs shoulders with Latin percussion and vocals at times, but it is no mere pastiche. Plus all the musicians have solid abilities and put them to good use.

However, it is Marc VW's electric bass that most often impresses. He takes on the lead melodic voice in spots and blends with other instruments on others (bass and tenor in unison is a favorite device). His solo work shows formidable technique and good taste. Clearly he is one of "emerging" bassists that extends the Jaco Pastorious legacy forward in time and stylistic development. He is pretty hot. Paul VW plays some invigorating traps too.

If there is a kind of polish on much of these cuts that is typically found in many dates of this sort, that is only to be expected. The slick veneer gives the music commercial potential and (one assumes) radio play. With all of that this is still some of the most appealing new music within this particular genre cluster. Not every cut is a killer, but the best ones get rolling. It moves!
Posted by Grego Applegate Edwards at 4:39 AM