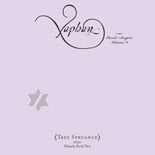 John Zorn is a complex person, musically and perhaps in many other ways as well. He started out as an avant jazz alto sax player, known for his high intensity approach. He became interested in the idea of game music, pieces with various instructions and parameters for the players with open-ended results. Then he has flirted with death metal, the music of spaghetti westerns, spy and film noire cinema, and surf-psychedelia from the ‘60s, fusion, and most notably, an exploration of his Jewish heritage. All these facets of his music intersect from time to time, with the latter aspect framing most of his later work.

In a Tzadik release that has become available in the last couple of months, many of these influences and styles come together in a most interesting meld. Xaphan is music from his Masada project, arranged with particular skill by Trey Spruance for Secret Chiefs 3. It’s a fairly large ensemble and they run the gamut for nuances of style and combinations thereof. The mideastern sound is always present in one form or other, but it’s transformed in so many ways as clearly to form a new music of its own. I can’t recommend this disk strongly enough for those exploratory souls that are tired of the same old routine. This will shake you up and there is enough of a rock-fusion edge to it that those coming out of that bag will not feel like they are in completely unfamiliar territory. I can’t help wonder what the reaction to this music is in Israel and the mideast in general. Some certainly might express some surprise that American music can sound like this. Zorn is one of our masters. He should help tilt the balance of trade (albeit the musical trade) out there.
Posted by Grego Applegate Edwards at 5:51 AM