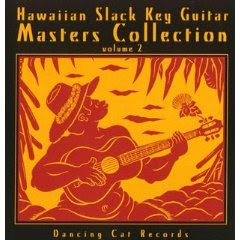 Hawaiian slack-key guitar is simple in conception. Pick up a steel-stringed acoustic guitar with standard tuning, tune down (slacken) various strings until you get a chord, then the fun starts. It’s a Hawaiian style that came out of the steel guitar efforts that were so influential to country music in the early to mid-20th century. You can put Hawaiian music into a number of phases: 1. The original chants (vocals and percussion, mostly) that were a part of pre-contact times and reflect an ancient Polynesian component found on many islands in the area. 2. The guitar music that came about as indigenous elements fused with the music of Spanish-speaking Gaucho cowboys who rustled cattle in Hawaii from the mid-to-late 19th century onwards. This also includes the ukulele music that spread as a craze in the United States in the early 1900s. 3. Choral music that developed when missionaries tried to teach sacred songs but it all ended up with a Hawaiian twist, a similar development to what happened on other Polynesian islands; 4. Steel pedal guitar styles that have been a trademark of much of the music associated with Hawaii, became huge in the US in the ‘50s and were reinforced on the islands through things like the long-running radio show “Hawaii Calls” as well as ever increasing influxes of tourists with their demands to hear such music. 5. The slack key tradition which is an outgrowth of #s 2 and 4 especially.

So we have a CD called Hawaiian Slack Key Masters Collection, Volume 2 (Dancing Cat). It’s a generous sampling of the music—16 tracks of the slack key in various combinations: guitar alone, with or without vocals, and/or in tandem with the ukulele, a second guitar, and/or an acoustic steel guitar. Now I am not sure why this should be so, but some of this reminds me alternatingly of Leo Kottke or Ry Cooder. And some of it just sounds Hawaiian to me. There is nothing by Gabby Pahinui, one of the more famous adepts in the music. But what IS here has a laid-back feel and will satisfy the casual listener who wants to mellow out as well as the acoustic enthusiast who will find the various picking and playing routines revelatory and instructive as well as quite enjoyable.
Posted by Grego Applegate Edwards at 7:46 AM