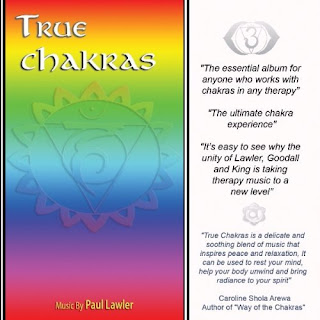 The things that I get sent sometimes! Today is an example. It’s a CD with music by Paul Lawler, designed to accompany an Eastern massage technique or related therapy. True Chakras (GeminiSun) has that cosmic drone and resembles new age sorts of music. It has a weight to it that brings it a notch above the usual vapid sounds of that genre.

It actually has moments that are quite pleasing. I am not sure what one is supposed to do for the “Third Eye Chakra” piece, but then I don’t know a thing about what Chakra therapy could be about. If this were to have been released in 1968, I am sure it would have met with enthusiastic response. As something out now, it is a bit of a puzzler. Here’s a CD destined for the cutout bin. If cheap enough, it would be worth getting for the sheer spacey qualities it has. Peace. . .
Posted by Grego Applegate Edwards at 7:04 AM