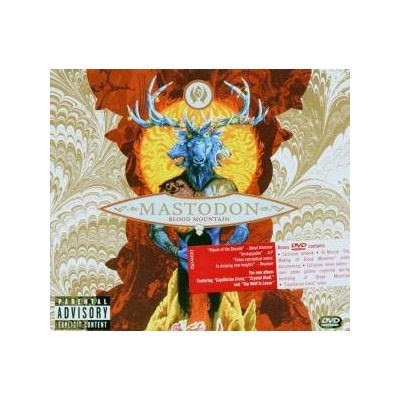 The metal band Mastodon has a new album coming out next year. Now a few weeks ago I would have met that fact with some indifference. That was before I was sent their 2006 disk Blood Mountain (Relapse). This is no ordinary metal album. The group has worked hard on their arrangements and songs. They are very good musicians. It’s not just speed metal and/or power chords; there’s more here. More variety and innovation in the music itself.

Guitars, bass and drums are all meshed into a playing octopus and each limb is indispensable for the group sound. And each player plays some great things on his instrument. Vocals have the emotion-wrenched angst you would expect from such a band, but they also can zero in on a more classic rock style, more melodic. The CD comes with a DVD disk that documents the making of the album and is one of the better such videos. You get a clear picture of the rehearsal and recording stages at various points in time, and it helps you understand the exceptional musical talents involved.

If I hadn’t stumbled on this one a year late, it would be at the top of my rock records of the year list. What the hell, I mentally put it there anyway. Nice production job too. Mastodon may give you a respect for metal you didn’t already have, if you are a skeptic. Fans of the genre probably already know them and I preach to the converted. Well, I am impressed. I look to the new album with anticipation!
Posted by Grego Applegate Edwards at 7:09 AM