B B King and Carlos Santana: Guitar Legends 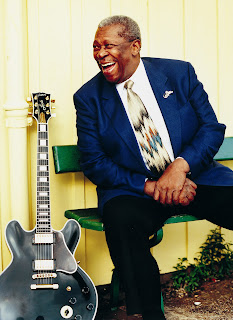 When you see a two-CD set called Guitar Legends that’s going for peanuts and has no real information about it on the jewel case, it’s a crap shoot. And if you’re buying it on an overstock bargain website, you know even less. That was the scene for me last year with a set of BB King and Santana sides (St. Clair).

The Santana CD was a demo, apparently, before the band cut their first record for Columbia. It has a few moments and holds interest from a historic point of view, but musically they just did not have the groove yet. It isn’t quite worth the peanuts.

The BB King disk has various levels of sound quality and was obviously recorded at vastly different points in his career. I am hard pressed to think of any BB that isn’t at least solid, and these cuts are no exception. It’s not necessarily the first CD by BB for anybody to get. It is certainly worth the peanuts regardless. And there is enough good-to-great guitar work to justify the title of the set. He’s been THE MAN for many years.
Posted by Grego Applegate Edwards at 6:58 AM