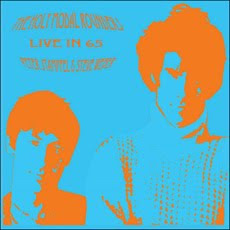 Maybe one of the most difficult musical tasks is to make a virtue of really “bad” vocals. A point is reached where such performances have a character that transcends ordinary notions of vocal correctness. The Holy Modal Rounders were masters of the art, perhaps no more so than on the previously unreleased recording Live in 65 (ESP).

For this gig it is Stampfel and Weber alone on acoustic guitar, banjo and fiddle. Here they concentrate on the old string band tunes they had mastered in their own way. There are also a few of the inimitable originals they were more likely to produce in a studio setting back then. It all works quite well. So much so that one wishes there were more sessions like it. A thoroughly entertaining set!
Posted by Grego Applegate Edwards at 5:55 AM