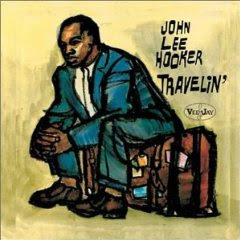 One more for John Lee Hooker. What was true of yesterday’s disk—that it contained many of his more familiar tunes, is not especially true of Travelin’ (Vee Jay), a 1960 release that also clocks in at 30 minutes.

Many of the songs are a bit more obscure and have to do loosely with traveling—getting there, being there, wanting to go there. As with yesterday’s release, it consists of very solid electric Hooker without the frills. His guitar on “Solid Sender” gives you the paired-down-to-the-bone blues, a perfect response to his irreplaceable vocals. Another great one. Tomorrow we venture into less charted areas. Until then.
Posted by Grego Applegate Edwards at 6:02 AM