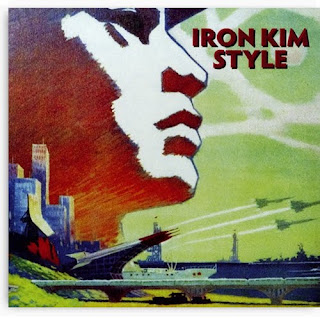 Electric jambands who come directly out of improvisational music practice are something special if they are good. And they are very much alive today. There’s for example Wadada Leo Smith and his work with Yo Miles and his own groups; there is the Indian Miles tribute band. And lots of others too. There is a resurgence of music that does not fear reprisals for plugging in and letting loose with challenging lines and shimmering envelopes of ensemble collectivity.

One of the most interesting and promising of such lineups is a band called Iron Kim Style. Their self-titled new CD (MoonJune) features five or six musicians from the Seattle scene. Guitarist Dennis Rea and drummer Jay Jasket, both also in the Moraine group (see earlier postings at our www.gapplegate.com/musicalblog.htm for a discussion of their CD), are joined by trumpeter Bill Jones and a group of intelligent and fluid instrumentalist for a heady workout.

This is freely conceived music that has spontaneity yet a solid group sense of where they want to go conceptually. Dennis Rea and Bill Jones are the most prominent soloists and they show their own take on where the music should be now. There is much in the way of group cohesion with plenty of room for individual expression. Thaddaeus Brophy’s 12-string works well with Rea’s six; bass clarinetist Izaak Mills (appearing on several numbers) has good interactions with Bill Jones’ trumpet. The rhythm section of Jasket’s drums and Ryan Berg on bass does not resort to the obvious sorts of riff devices so often used in these situations, and Jasket’s pulse is fluid in a way that does not follow the models for imitation often invoked in such a setting.

The music can get pretty dense harmonically, and when you least expect it (on "Pachinko Malice"), breaks out into free swing and some terrific guitar work from Dennis Rea with Bill Jones and the rest of the band contributing to the atmospheric texture.

Iron Kim Style are not attempting to coddle to mass tastes. Their music here is distinctly uncompromising. What results is an excellently conceived and executed journey into the outer realms of electric music. They shine with a brilliance at times. There isn’t a flubbed moment on the whole disk either.

This is music to stir the senses. It is challenging but very rewarding on many different levels. There is originality and there is a convincing directness. Bask in its dazzling excess of light, huddle in the depths of its darkness. An excellent effort this is! Give it a listen.
Posted by Grego Applegate Edwards at 6:37 AM