A Debut Recording by DouBt 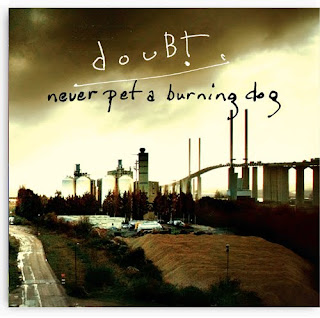 Some reviews nearly write themselves, usually because the music is on a wave-length that for me is almost intuitive and second nature. The debut recording by DouBt, Never Pet A Burning Dog (MoonJune) I find to be of that sort.

DouBt makes its way imaginatively between the cleavage of the progressive rock and the fusion realms. It is rooted partly in Canterbury school sounds, but equally in the general aesthetic found in the outer rock and fusion realms of the peak late psychedelic period. It builds upon such foundations to create a music that does not sound dated, nostalgic or overtly derivative.

The band's background helps explain why that is so. The core group is the trio of Alex Maguire on keys, an important member of Hatfield and the North; Michel Delville on guitar, lately of Wrong Object and Elton Dean; drummer Tony Bianco, who has been with Dave Liebman among others. They are joined by another Canterbury artist, guest musician Richard Sinclair, on vocals and bass for a number of tracks.

The music has good compositional ideas (band originals and one nicely rearranged Terje Rypdal piece), a few evocative vocals and excellently driving, outside instrumental prowess. This is a group sound but both Macguire and Delville get a chance to expound some of their considerable improvisational abilities. Bianco can skitter freely or dig deep for a rock groove. Sinclair's bass goes well with it all on the numbers where he appears.

What's most important about this recording to me is the fact that the music takes a stylistic point of view that doesn't shy away from blazingly heated, trailblazing butt-kicking. It excels in putting across a modern post-before kind of music that combines electrical power with instrumental subtlety. It not only promises much for the band's future, it already delivers the first instalment of what it does promise. An excellent album on all levels.
Posted by Grego Applegate Edwards at 4:32 AM