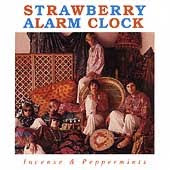 We look back again today to the nether regions of the murky past. I’m not sure why from some legitimate view, but last year I grabbed a reissued copy of the Strawberry Alarm Clock album Incense and Peppermints (Collectibles), which I guess came out around 1967. They had the big hit with the title cut and represented one of those bands who embodied the keen teen psychedelic ethos.

The album is rather funny. There’s a tune from Hair, some hokey love-in music and some further attempts to cash in on their first hit with follow up numbers. Dated it is, and charming in its off-kilter bid at popularizing the emerging youth culture. They had especially designed for them a line of really bizarre looking guitars and basses. You can see photos around if you search. They looked like paisley toboggans. Well that’s enough of that kind of music for now.
Posted by Grego Applegate Edwards at 5:57 AM