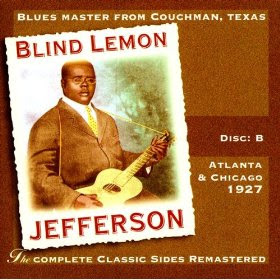 The early “folk” blues as represented on record is one of the treasures of American Culture. Robert Johnson, Blind Willie Johnson, Skip James, Blind Blake and a number of others created some masterpieces of the three minute art form in their day and their music lives on for those that seek it out and those who have admired artists who embody the spirit of their work.

One of the most important and prolific of these bluesmen was Texas master Blind Lemon Jefferson. There’s a box set around of his work from 1926-29 and it is a revelation (Blind Lemon Jefferson: The Complete Classic Sides Remastered on JSP Records). Although the recording quality varies from acceptable to pretty awful, once one adjusts to the technical defects and the minimal lineup of Blind Lemon’s vocals and his acoustic guitar, sometimes his piano, pretty much nothing else, his genius comes through. Interestingly there are a number of songs that technically are not blues in the sense of the chord sequence standardized over the years. And he revisits some of the same materials in the different sessions, deepening his commitment to their essence as time passes.

But it is the perfect combination of soulful voice call and solo guitar response that most fascinates. His is a two-way dialogue between both elements and he works out ingenious weavings of them in ways that can only bring astonishment on close listening. Four full CDs is a lot to digest, but in the end one comes away with a complete picture of his style and how important a pioneer he was. The set is going at a bargain price last I checked. It’s a tremendous addition to anybody’s collection, anybody with a feeling for the blues. In today’s world the blues still have the power to musically transform troubling experiences and make something beautiful out of it all. Blind Lemon comes through these scratchy recordings with a voice that speaks to us as powerfully today as it did in 1926.
Posted by Grego Applegate Edwards at 6:17 AM