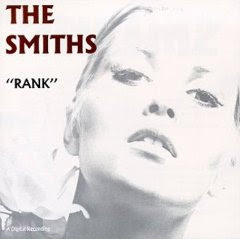 There was nothing quite like The Smiths for a combination of Paul Mars’ guitar musicality and vocalist Morrissey’s poetic lyrics. They counteracted the go-go eighties with a dose of despair and doubt, and melodically they were really very inventive. Morrissey and Mars had a chemistry that proved too volatile for a long-time association, and so no more Smiths since, what, 1986?

They released the live album Rank a little later and it is culled from 1986 concerts. I missed it on its first outing and only now have given it a long listen. I find it slightly disappointing, maybe because it doesn’t have “How Soon is Now” on it. This may seem petty of me, and it is, I suppose. Beyond what is missing, it is a solid, well recorded set of live versions of many of their most known tunes. The live versions may not be all that different than the studio ones, but there is energy there. I wouldn’t pick it up if it was a first Smiths acquisition, but it is nice to have if you are ga-ga about the group.
Posted by Grego Applegate Edwards at 6:32 AM