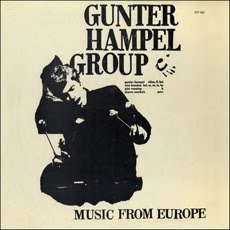 The free jazz, new thing, and/or improv movement in jazz was well underway in the mid’60s. By that time there was a rising coterie of players in Europe who had begun to add their own twists and turns to the music. One of the first, and one of the best of the European recordings documenting the scene was released in the States some time around 1967. It was led by vibist, reedist and composer Gunter Hampel as Music from Europe (ESP) and it gave notice to the world that henceforth the music was to have multiple centers, that New York was only one of the creative hubs on the scene.

The album has been reissued and those with hungry ears will want to listen to it. Gunter is joined by reedman Willem Breuker in a quartet setting. Willem was to have an important influence on the music and that continues today. Mr. Hampel went on to make many interesting recordings and remains an important influence in his own right. The ESP recording is a mix of ever-shifting instrument combinations and composed frameworks introducing freely expressive work. I am glad I can listen to and enjoy the disk again after so many years have passed.
Posted by Grego Applegate Edwards at 6:16 AM