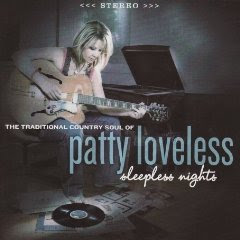 Misery. Sheer misery. Some classic country songs addressed the pain of romantic entanglements with unforgettable clarity—love unrequited, de-requited, out of bounds or just plain old dysfunctional. Country when it's very good has a power to pierce through everyday indifference the same way its sister music, the blues, can do. A great song of this sort can capture in very few words and a haunting melody a situation of desperate hopelessness. That some of these songs can do that and be huge commercial successes says something, and at this hour of the morning I am not sure WHAT. Art and popularity aren’t always separated by a huge chasm? I guess that.

There’s no better place to find these sorts of treasures than on Patty Loveless’s CD Sleepless Nights (Saguaro Road). Now I don’t know a lot about her because country music is something I only experience at the periphery in terms of today’s incarnations. But she’s taken 14 absolute classics of the kind we’re talking about and remade them in a way that echoes true. She has a marvelous set of pipes for this kind of music and the vocal harmonies and arrangements are perfect.

When I grew up, most of these songs were in the air. No matter who you were you heard them and knew them. They shaped in some inescapable fashion how you looked at the world. “Please Help Me I’m Falling,” “There Goes My Everything”. . . they just said it all. Most importantly though, Patty gives them a new life. Such a remaking project can and does often falter. The artist should have total respect for the styles invoked and put herself into it with all there is. She does that. There is a distinct something in the lead vocals and harmonies that goes right down to the essence of Country. She captures it where others today have too frequently failed. She is a hell of a singer. This CD is a knockout.
Posted by Grego Applegate Edwards at 5:45 AM