Crosby, Sills, Nash and Young: It's Deja Vu All Over Again 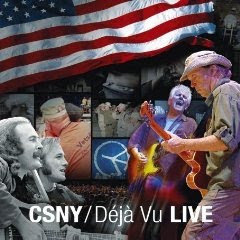 Crosby, Stills, Nash and Young have returned. Their new CD “Déjà Vu Live” (Reprise) corresponds with a movie of the same title. I can’t speak for the latter, but the CD is in essence a logical follow through from Neil Young’s recent Living with War album. The CSNY features a few of the old hits but mostly Neil Young’s politically anti-war, sick-of-Bush anthems. It took a bit of courage to come out with Living with War when Young did. Now the sentiments seem more mainstream to America, judging from opinion polls.

A version here of the old Buffalo Springfield “For What It’s Worth” sounds as contemporary and as relevant as ever. The new songs will appeal to those inclined—not exactly music for McCain supporters. The harmonies can be a little rough around the edges (it’s live and they don’t have the advantage of a studio situation to get everything perfect), the guitar work what you’d expect from them, and that’s fine.

I’m not going to say anything against this record. It’s nice to have them playing together again and nice to hear people taking a stand for what they believe. We need that badly. The Constitution guarantees it. Get yourself a guitar or strap on your old one and write your own anthems, please. We will all be enriched.
Posted by Grego Applegate Edwards at 6:44 AM