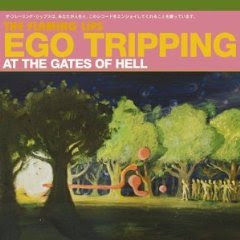 The Flaming Lips and their Yoshi were mentioned earlier in this blog. I still feel that the group's main thrust is the adolescent shtick. Pop-rock for the pre-teen and teen folks. On the other hand, a car commercial was running this summer with “Do You Realize” as the theme song. Now sometimes I search Madison Avenue for deep meanings when there aren’t supposed to be any. Why that song? Probably somebody said, “We need to license a hit that would be nostalgic for x year olds.” Or maybe they just needed familiar music. At any rate the car in question and the song did not seem to fit. We’re all gonna die and some nymphet has beautiful eyes. Fine. Buy that car and you’ll be happy like a 13 year old on a first date. Then you'll die. Is that it?

I now listen to the EP that followed Yoshi—Ego Tripping at the Gates of Hell (Warner Brothers). It has two remixes of “Ego Tripping” and a version of “Do You Realize” with some beats. There’s a heavy synthesizer component to these mixes, and I guess you could dance to most of it. There are also new tracks. “A Change at Christmas” has nice sentiments and could fit in with your holiday listening if you need some new things to add to your festivities mix. OK, Flaming Lips have some memorable melodic hooks and I can’t say that I dislike the stuff. Seems like music one outgrows though. . . or looks back to fondly as associated with youthful activities. Tomorrow we grow up. . . or we have already. No choice there. Signing off with a Dixon number two pencil.
Posted by Grego Applegate Edwards at 6:49 AM