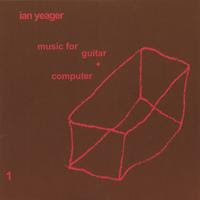 I had never heard of Ian Yeager, but when I was browsing on the CD Baby site, I spotted his recording of Music for Guitar and Computer and on an impulse took a chance and ordered it. It is a full CD containing one long piece broken into small sections and it has become more and more attractive to me as I listen.

It is in the ambient mode, something a little like Brian Eno’s work. The electronics appear to be altered guitar sounds for the most part, and they doodle and drone as the guitar in a clean electric mode arpeggiates chords, plays melodic fragments that repeat and otherwise sets up a dream-like musical landscape.

It is not a piece of music with rapid fingerings or anything that would make you think, “wow, what a guitarist.” It does stick to your musical ribs though. Once you hear it a few times, a clear picture of the music stays in your head so that a year from now, say, you might pull it off the shelf and remember what it sounds like and want to hear it again. In our throw-away world that in itself is an achievement.
Posted by Grego Applegate Edwards at 6:13 AM