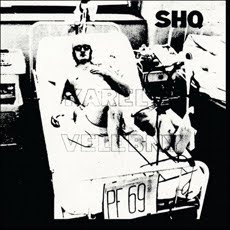 On my local NYC area television there’s an ad that gives you the following message: In these disturbing, troubled times, you need to go see the new Broadway production of Mary Poppins to return to a state of mental comfort. Well, I’m sorry. The last thing I need is to nauseate myself with such pap. I don’t need reassurance from the likes of Miss Poppins. The world of Mary Poppins never existed and what resemblance it has to historical reality is distorted and rather ridiculous, though there may be a few tunes in there that still can charm in their sloppy sentimental way. The revival of such paltry drivel is counter-productive to what American culture does best. Let Disney's company make their zillions, just leave me out of it, please. Advertise somewhere else and I wont have to deal with it, OK? So what do I need? I don’t know. The election to be over, for one thing. And. . .

Perhaps today’s review CD. There was a reed/vibes player from then-Czechoslovakia named Karel Velebny who recorded an album (SHQ) for ESP in 1968. It originally came out right around then and it was a further sign that Europe was developing distinctive jazz composer-musicians that could hold their own in the world arena. The CD has been reissued and to me it still sounds good. It’s a set of free-wheeling numbers that have a very tangy feel to them. All musicians in this five-man ensemble contribute to the distinctive sound of the recording and the results satisfy. It’s avant without being especially abrasive, and it swings too. There was at least one other record by the group that came out over there, but no others released in the US, as far as I know. The European Jazz scene was to become more and more of a factor in the music throughout the ‘70s and ‘80s, and is here to stay. This record documents a very promising group that never really made the impact it was capable of. And it’s far more deserving of your attention in these times than is Mary Poppins. Duh.
Posted by Grego Applegate Edwards at 6:30 AM