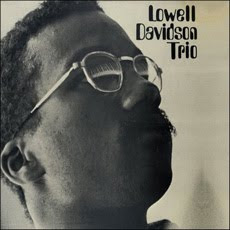 In the realm of the piano, free jazz didn’t have very many players that were being documented in 1965. Part of that had to do with Ornette Coleman’s pianoless quartet, which influenced the jazz world highly beginning in 1959. Of course the grandfather of all free jazz pianists, Cecil Taylor, was going strong. Then there were people like Paul Bley, Burton Greene, Dave Burrell, and a handful of others, one of which was Lowell Davidson. He made a record for ESP with a trio in 1965, and then I don’t know what happened to him.

That record was promising. ESP has just re-released it. It has Gary Peacock on bass and Milford Grave on drums, both monsters at their craft. There are brittle improvisations throughout, with no compromising for popularity’s sake. Its not one of those blow-it-out-your-socks, frenetic rave-ups. It is abstract and of a high caliber. It is in the idiom squarely. And it deserves to be heard again.

Guitarists from those days playing free? Sonny Sharrock was one of the main ones. I’ll get to him soon enough. Tomorrow something very different.
Posted by Grego Applegate Edwards at 6:08 AM