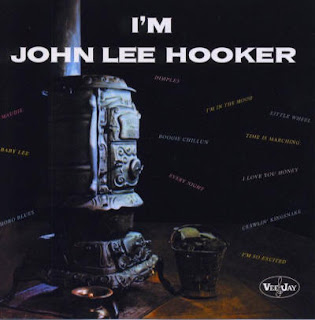 John Lee Hooker was a real presence on Vee Jay records during the ’50s-’60s. Some albums released cuts already on LP, some overdubbed female backup vocalists to try to capitalize on the popularity of soul. He was never less than himself, no matter what they did with his tracks.

The 1959 I’m John Lee Hooker had some of his best, unadulterated with overdubs. “Boogie Chillun,” “Crawlin’ King Snake. . . ,” these were timeless blues classics. Sometimes he made the blues chord changes; other times he stayed with the root and droned hypnotically. Despite the 32 minute time length, there is much great music on this release, available on Collectibles. Tomorrow, one more by John Lee and then we move on. Nothing like the blues to shake off the rust and move into a new season.
Posted by Grego Applegate Edwards at 5:52 AM