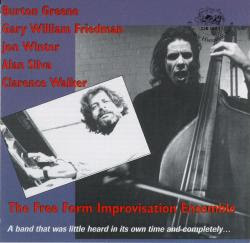 Early free jazz can be quite interesting. Much of the music was made before any set routines or formulas were imposed by the players on themselves, at least potentially. Nowhere is this more apparent than on a previously unreleased recording by pianist Burton Greene, bassist Alan Silva, and some rather unknown but canny wind players and a sensitive drummer.

Known as the “Free Form Improvisation Ensemble,” they rehearsed and experimented at their home base in NYC and made these recordings in 1964 before any of them had produced a commercial release. The music is finally available on Cadence (www. cadencebuilding.com) and it is an unexpected treat for those with open ears. They never act predictably. Anything can and does happen. The musical events have a freshness that belies the age of these sides.
Posted by Grego Applegate Edwards at 7:32 AM