Will Staind Leave Its Mark? 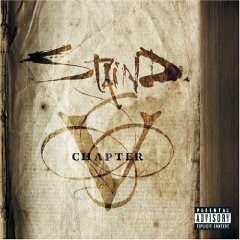 When a band sells millions of CDs, that implies a certain acceptance on the part of the music public. So what’s the point of a review here? I speak of Staind. I am just getting around to their Chapter 5 album (Atlantic) and I know there’s a new one. I received the deluxe edition of the 2005 release, which contains extra cuts and an entertaining DVD covering the making of the album and live footage. It’s no secret that CDs of this sort are compressed at the max and mastered at a level that is super hot, so that whatever machine or format you listen with cranks the music at a level comparable to late night TV ads for Ginzu Knives or other such items. The difference is that the movie it blaringly interrupts is the movie of your life and the product the CD is selling is ITSELF. Now I have no intention of getting cranky about this state of affairs, but it can be quite annoying if you have a multi-CD changer and one comes on that literally shakes the foundations of your soul, not to mention fillings and bridgework. Enough of that, though.

Staind is cool with me. There’s musicianship and definite tunesmanship. The instrumental work is competent and well wrought. My only quibble is with the vocal harmonies, which have a certain sameness in terms of intervals. Please, more than 3rds and triads would add a level of interest. Also, there’s an awful lot of music on this disk—more than 70 minutes worth. That’s good from a value standpoint but if you are like me and still conceive of albums as something to listen to as a unit, straight through (I know that may date me), it gets tiring with all the full-out cranking and emotions-on-your-sleeve vocalizing. But overall, groups like Staind are a good thing, a healthy component of the rock scene. Guitar lovers will appreciate their acoustic and electric string envelopment. This is no jamband though, so don’t expect much solo work. Power chord fans will be rewarded with splattering bursts of sound that have great power. But hey, if you know these guys, I don’t have to tell you, do I?
Posted by Grego Applegate Edwards at 5:58 AM