Richard Barbieri Spooks You Into A New Universe 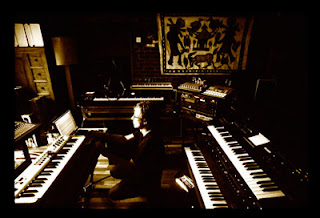 There are CDs that come along that cannot be easily categorized. Porcupine Tree keyboardist Richard Barbieri’s new solo release Stranger Inside (Kscope) is one of those. It has sophisticated rhythmic things happening and it gives you a wide spectrum of fascinating musical sounds that hypnotize and take you to other worlds, some places very far away.

It is Barbieri's second solo effort and a substantial one at that. The key work is subtle and rich. There are some really nice lines played by bassist Danny Thompson. The sampled vocals of Tim Bowness (No-Man) and Suzanne Barbieri help the spacey qualities tie into a human voice. It isn't new age—it’s much too progressive and filled with good musical content. It might be dubbed progressive-rock-without-the-rock. Wherever you want to put it and whatever you call it Stranger Inside has that indefinable something that spooks you into a new musical universe, a friendly one but maybe a little lonely without your ears for company and now happy you have joined it.
Posted by Grego Applegate Edwards at 7:27 AM