Pandelis Karayorgis and his Trio 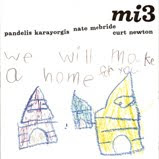 The music scene in Boston has been a singular one for many years. The great number of college situated there, the presence of Berklee College of Music, Boston Conservatory and the New England Conservatory of Music means that there is a large pool of teachers and students of high caliber gigging in town, and the general heightened cultural climate traditional in Boston creates favorable conditions for music making (at least for the listener, if not the musicians themselves).

One such musician on the scene is pianist Pandelis Karayorgis—and the trio of which he is a member, the mi3. This is a group formed out of a relatively long-standing tenure as the house band at a local club. Because that venue had/has no piano installed, Pandelis resorted to a Fender Rhodes electric as his instrument for the duration. Using that instrument with various effects and forming a solid musical bond with fellow bandmates Nate McBride on bass and Curt Newton on drums have generated a musical entity that extends the scope and depth of the trio date while forging a distinctive bond between sound and sense.

Their first album (I think), We Will Make A Home for You (Cleanfeed) consists of loose yet very together musical workouts on pieces by Monk as well as a few Karayorgis originals, an Eric Dolphy number and one by the pianist Hasaan, who recorded an album with Max Roach many years ago.

This is a very strong set with some of the electricity and punch of Rock but thoroughly enveloped in the post-Monkish trio approach that Pandelis and his colleagues pull off so effectively. It’s the kind of music that occurs when three very strong players gig regularly and have a chance to work out a sympathetic musical relationship of give and take. It is loose yet fully vetted by an intense inter-familiarity of what the musicians come to expect from each another. It is one of those disks that you might file away for a bit but find yourself coming back to regularly. The group recorded another session with Karayorgis on acoustic piano which is excellent as well. Search for mi3 on the net and you’ll get a complete picture of what’s out there. Check this one, though, if you want an intelligent take on how electronics and modern improvisation can form a potent blend that transcends category. It’s very good.
Posted by Grego Applegate Edwards at 5:49 AM