Caribbean Music Speaks to Us in Nonesuch Explorer Volume 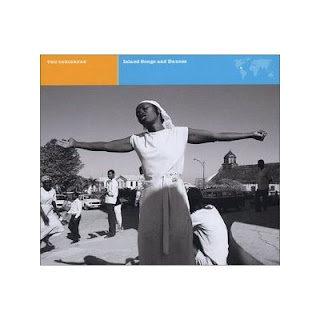 Music from so-called “exotic” regions, “ethnic” music, world “folk” music and music in similar categories often is captured with the thought that you get important results by equipping oneself with a portable recording machine, circumscribing a region to collect examples, then roaming around and tapping the local musical scenes you find, with an eye to authentic, traditional materials. This method has yielded some wonderful results. Of course, it is not necessarily a “true” picture of the full gamut of musics going on there. Lounge lizards, hotel music, commercial groups, more pop oriented music, club bands playing national styles, institutions you are not privy to, seldom performed music for cyclical occasions you happen to miss. . . these things are often left out of the survey and that’s not necessarily good nor bad. Take the example at hand: The Caribbean—Island Songs and Dances (Nonesuch Explorer).

Of course the Caribbean has produced much that is foundational yet highly distinctive from a musical standpoint. Lively bands with high musical professionalism, a well developed set of styles that have met with assimilation, acceptance and approval far from the borders of where the music was originally made. That is not represented here in any concrete way. The Nonesuch set concentrates on local traditional songs with simple accompaniments of percussion, elementary guitars, hand clapping, etc. It has its definite attractions but one gets the feeling the very best of the local music makers may not have been caught in the act. It’s like if someone brought a tape recorder into my NJ town and looked for people to make music. There might be some fortuitous discoveries, and certainly much of the music captured would be part of the roots of American music I suppose, but that level of music making is becoming ephemeral, if it hasn’t already. A century ago, the results might have been more interesting, at least to listen to today. Certainly the Caribbean has had less destruction of local music by the communications revolution, especially in 1972 when these sides were recorded. And perhaps the local traditions are more resilient. Nonetheless, this is interesting but in no way exceptionally good music. It is a document of what someone found, with some moments that stand out. If it is the music of YOUR traditions, that’s another matter. You might treasure them far above their intrinsic musical appeal because they represent the roots of your own musical consciousness, maybe. I’m not from there, so it means less to me. Regardless it is of course important that music such is this is collected and made available. It helps us understand what musical humanity can do, wherever it finds itself. This CD is part of that, but not a particularly revealing one from a musical perspective.
Posted by Grego Applegate Edwards at 6:44 AM