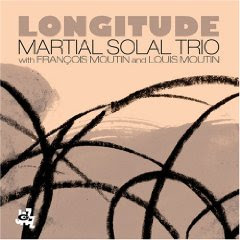 Martial Solal, jazz pianist of many years standing, came out of Europe in the ’50s and made his mark as a significant stylist with an approach that was wholly his own. He is still at it today and sounding better than ever. A new release, Longitude (CamJazz), finds him in his accustomed trio setting, playing with bitter-sweet poignancy and spinning long jagged lines of a true musicality.

His trio of upright bass and drums (Francois and Louis Moutin, respectively) seems well attuned to his approach and follows him intrepidly into his maze of rhythmically brittle edges and labyrinthine harmonies. His is a musicianship to be reckoned with and there may be CDs that match the current level of inspiration, but nowhere is he better represented on disk than in this offering. Guitarists and maybe even harmonica players could learn much from him.
Posted by Grego Applegate Edwards at 5:30 AM