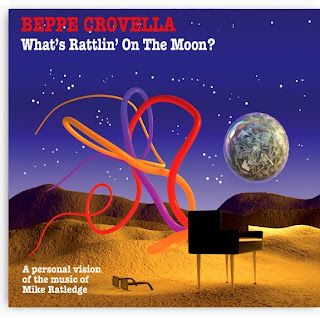 The modern arsenal of keyboard instruments and colors available to the player today has become rather vast. A player with imagination and a sense of form can create virtually symphonic pieces if he or she goes about it in the well equipped studio. That’s just what Beppe Crovella has done for the music of Mike Ratledge of Soft Machine on What’s Rattlin’ On the Moon (MoonJune).

Ratledge in his prime years with the Softs created a body of compositions that certainly deserves reconsideration. Beppe takes some of the best and gives them a freely creative interpretation, calling upon the tones inherent in some classic instruments: the Mellotron, electric pianos by Wurlitzer, Fender, Hohner, plus the Hammond, Hohner Clavinet, Farfisa and a Rosler grand piano.

This is music of a spacy sort, which is appropriate for Ratledge’s style, and Beppe puts his own stamp on the proceedings. Half the CD directly addresses Ratledge’s music; the other half consists of improvisations and compositional ideas by Beppe himself.

This is a quite enjoyable suite of music that hearkens back in part to the heady days of psychedelia but then takes steps into the future as well. It will appeal to all Softs fans and capture the interest of those not all that familiar with the band in it’s peak years. Give it a listen!
Posted by Grego Applegate Edwards at 5:58 AM