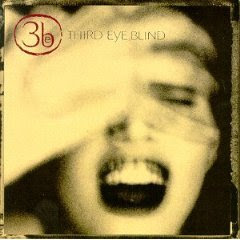 Back to some alt classics. Third Eye Blind’s first CD (Elektra) sold zillions and gave power pop a poster boy (poster boys?) for the state of that art. Listening now, I find it still inundates the listener with strong grungy power chord progressions and a solid string of sincerely crafted, substantial tunes.

They created a musical model followed by more than a few other bands, teen television shows, and things associated with the ever-lucrative youth market. But they did it all as good or better than anybody. Of course, the band sound is really the catcher. It is thick and dynamic. Other CDs followed and there’s supposed to be a new one, though I have not caught it. The first one set the tone.
Posted by Grego Applegate Edwards at 6:01 AM