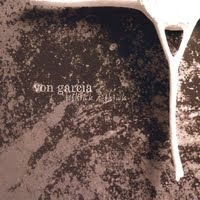 The number of small labels out there seems to have increased exponentially in the last decade. Some consist merely of the musician-owner and that’s about it. Others have more players involved, producers, music distributors and that sort of thing. Sluggo's Goon Music (SGM) is somewhere in the middle of the more elaborately structured types, a cooperative based in NYC. It is owned and run by a small group of stylistically sympathetic musicians and they do it all themselves.

Von Garcia, one of the groups on the label, is dedicated to what they call ambient noise rock, which sounds to me like progressive rock with plenty of air in it. Their new release i think a think brings together core creative directors James von Buelow and Damon Trotta, guitarist and bassist, respectively, with a group of fellow travelers. There are plenty of fine segments on this disk—some great atmospheric envelopes and drivingly cosmic lead guitar spotlights.

It has a basic rock rhythmic foundation and builds additively on that—or subtractively for those primal soundscape events that contrast with the pure drive. It is a very good listen. Lots of musical thought has gone into the disk’s production and there is a continual transformation of creative sounds that will appeal to those of a progressive bent.
Posted by Grego Applegate Edwards at 6:26 AM