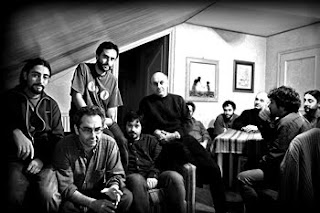 The dreamscape qualities of some of the new progressive-alternative rock can be quite haunting, like a dream of your first love filtered by time and the mist of the passing blur. Nosound’s new album lightdark (Kscope) is like that. The band is the vision of Giancarlo Erra. One cut has No-Man’s vocalist Tim Bowness. The whole thing lays out long and leisurely, lingering over ambient textures that flow evenly and directively, slowly making their way like the water in a small brook.

Lyrics evoke memory-images in the mind, and there’s a hint of the psychedelic, mellotron laced music of an earlier era, a kind of sensitive, musically more savvy Pink Floyd, a King Crimson for today’s jaundiced world. There are some lyrical guitar solos and echo-rich vistas of sound. The mini-epic "From Silence to Sound” has moments that can only be described as beautiful, a word I do not often use. Lightdark is a real treat for the musical senses. It is a band that must be a trip to catch live. Grab the CD to get the studio magic that results when they layer sounds with musical care. It’s a good one.
Posted by Grego Applegate Edwards at 6:37 AM