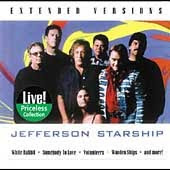 The Jefferson Airplane/Jefferson Starship managed to stay together nearly as long as the Grateful Dead. Yet they were not able to maintain the mystique of Garcia and company. The Starship appears to have reformed in recent years with a few of the original members. Like the Dead, they emerged from the San Francisco scene during the heady late ‘60s. And like the Dead they could sound great live or, if things weren’t quite right, not so great.

There is a live Jefferson Starship CD as part of Collectible’s Priceless Extended Versions series and it falls under the "not so great" rubric. It has the virtue of going for less than standard cost, but that may not be quite enough to make it worth your while. It was recorded at an unspecified time, after Grace Slick had been replaced and the new female singer sounds pretty good. Instrumentally the band is fine but not up to their original standards, and they roll through many of their old hits. By midway through the set, on a version of “Miracles,” the male vocals become something less than sterling and it mars the entire disk. Get their earlier Bless Their Pointed Little Heads if you want to hear them in their prime. The Priceless disk doesn’t quite make it.
Posted by Grego Applegate Edwards at 5:48 AM