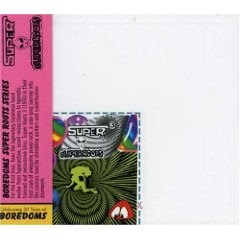 The impossibly diffuse Japanese avant-rock band Boredoms and their re-release compilation “Super Roots” (Vice) have been the subject several times on these pages. We turn today to volume three, Hard Trance Way (Karaoke of Cosmos). It’s one thirty-something-minute cut with a heavy drum pulse and guitars thrashing away on the same one or two chords without pause, the only changes being a modulation of key every couple of minutes.

This is extreme music, head-banging stuff, and it certainly took some amount of nerve to record and release it. It fascinates me because it is so empty of anything but one gesture. It captures the banality of some metal and sets it up as a pared-to-the-core model to be questioned, emulated, dismissed, or idolized. Your choice. I think it's one of their best but it may drive some people nuts. Signing off—It’s my vacation and I am dropping junk off at the dump!
Posted by Grego Applegate Edwards at 6:11 AM