Frank Senior and His Relaxed Vocalisms 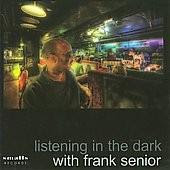 The world of the jazz singer is in many ways declining. The mainstream of music, from which artists emerge, has changed radically. Hip hop, rap, and rock are not necessarily fertile grounds on which singers can develop. Each music has different goals that do not have a great deal in common with the jazz vocalist and his or her art.

Jazz singers look to a body of repertoire generally of previous generations—songs associated with the traditional jazz repertoire but mostly initially a part of Broadway and the hit parade of a long time ago. “The Great American Songbook” is what it is usually called. Now these songs can be absolutely great. But what do you do if you are singer number 200,000 tackling “Autumn Leaves?” What do you bring to it? Often singers are faced with insurmountable challenges in trying to make it fresh. Some develop mannerisms, ending up with the equivalent of musical ticks, to give that old song more jazz inflection. And sometimes these are musical clichés that were hackneyed 30 years ago and sound even more trite today. The results can be painful, and you have to feel sorry for some of these folks. What can they do? The situation can best be described by the phrase “many are called, few have the talent to answer.” Yes, and there are those that have managed to overcome the inertia built into the scene and go on to thrive in various ways.

Here’s one solution. With the CD under consideration today, Frank Senior [Listening in the Dark (Smalls)] takes a sample of the standard songs and simply treats them as old friends, singing straightforwardly without affectation. He has a casual, relaxed approach and his wide ranging baritone-and-above voice really is very appealing. Like Brook Benton in the r&b/popular field before him, he succeeds by not trying too hard and letting it fall where it lies.

He’s playing with a fine set of musicians tuned to the occasion, the under-heralded Bob Mover on winds, for example, and a tasteful guitarist named Saul Rubin. Plus the songs are a good mix, not just the expected chestnuts. “Route 66” works well, and he also finds inspiration in such songs as “Autumn Serenade” (a right song for the season, no?) and “Just You, Just Me.” He’s simply good. And he deserves to be heard by those with the inclination to hear this sort of thing. They will be rewarded with a very nice CD, very nice indeed.
Posted by Grego Applegate Edwards at 6:07 AM