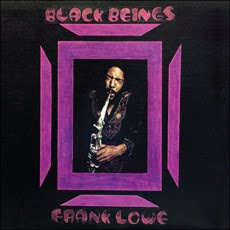 The late tenor saxophonist Frank Lowe recorded and released an album in the early ’70s [Black Beings (ESP)] that at the time I thought was the most extreme music I had ever heard. It’s Lowe and AACM/Art Ensemble tenor man Joseph Jarman with electric violin, bass (William Parker), and drums. It was the tenor playing that was the kicker. They both honked, squealed, screeched and caterwauled with frenzy and abandon throughout in a tour de force of extreme weirdness.

ESP has released an unedited version with extra minutes that originally had to be removed for the performance to fit on one LP. It still sounds pretty extreme, but maybe not nearly so to me as it did then. Of course, I’ve listen to a great deal of out music since 1973, and the sounds produced by the tenor duo are more mainstream now, to those that listen, than they used to be. That is not to say that this disk doesn’t have the power to send the uninitiated through the ceiling. It isn’t going to get on the airwaves next to Nelly in the coming months. It still has enormous power and that can intimidate someone who doesn’t yet hear the passionate music as a high point in human expressivity.

Like the birds, there are those that warble and chirp, those that honk and give out with piercing swoops of sound. On the human level we can choose what sounds we make. Not the birds. A crow cannot wake up one morning and ask himself which sorts of sounds he is in the mood to let loose. At least not as far as I know.

This Frank Lowe album greatly benefits from being reissued without the edits. It is more balanced, more whole and organic. Don’t expect John McCain to be playing it at his next fund raiser. The rest of us can and should experience this music as part of our cultural heritage. It is a classic of hyperventilation and aggressive music making. Good for that. Let’s make this more popular than Britney and her cutesy dithering. Why not? We aren’t birds. We get to call the tunes we want to make, the music we want to hear.
Posted by Grego Applegate Edwards at 6:04 AM